Mucking about on Facebook one day, I chanced upon the exquisite loveliness that is Talliston House & Gardens.

Recently, the Talliston dream has been threatened by the most mundane of circumstances – money, or the lack thereof, which has fueled this project from day one (cripes, am I starting to sound like Kevin McLeod or what?).

John’s goal was to create something extraordinary from the means of an average living wage, and he has done just that. With the loss of his job recently, the future of Talliston is now uncertain. In fact, it has just been listed on the market.

Enter the Saving Talliston Indiegogo campaign that could be the gamechanger for this artistic enclave, which in addition to being a private home, is also host to writing and poetry groups, and serves as a performance space for various artists and musicians. 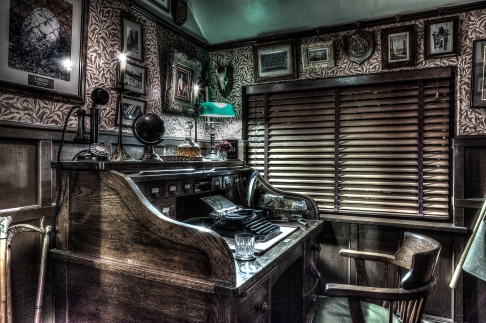 Allow me to quote briefly from the Indiegogo appeal:

Talliston House & Gardens is a project that has taken the most ordinary of English dwellings – a three-bedroomed, semi-detached, ex-council house in Essex – and over two and a half decades has painstakingly transformed it into a magical labyrinth of locations, each set in a different time and place.

After years of design, research, sourcing and construction, each room or garden is infused with a rich story, incorporating over 1,650 antiques and authentic objects sourced from 27 countries across the globe. With a name that means ‘the hidden place’, Talliston is not just an interior design project. Instead, it is a growing community venue that serves as an inspirational wonderland for writers, artists, craftspeople, and anyone seeking the extraordinary within the ordinary.
And all this has been accomplished by an ordinary team of people – all inspired by the project’s unique vision.

Impressed by the writerly credentials of the owner, and his commitment to such a wonderfully unusual and creative project, I recently joined the Talliston Writers’ Circle and attended my first meeting in May.

Everyone was incredibly friendly, even though I was the Max Headroom character in the corner on a laptop screen, a bleary-eyed Australian doing a 5am live Skype cross with my British counterparts on the other side of the planet (isn’t technology wonderful?).

It was a great meeting, and we were treated to a talk by crime novelist Linda Stratmann who walked us through her Frances Doughty Victorian crime series, and also talked about the various true crime books she had written. Book #1 The Poisonous Seed is now at the top of my reading pile 🙂

I sincerely hope John and his friends can save Talliston. It’s a special place, one imbued with magic and mystery. Talliston means ‘the hidden place‘, and I can’t think of a more fitting name for the labyrinth of painstakingly created rooms that lie behind the unassuming door of this ex-council house.

Like a series of movie sets, it’s the perfect house for creative types, and one worth saving. If you can spare it, fund the dream in whatever small way you can.

We need more magic and beauty in this world.