“A classic, timeless work back in print at last.”
Dr Karl Shuker, zoologist and author 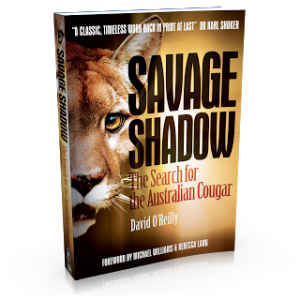 Back in the late 1970s, journalist David O’Reilly stumbled across a mystery bigger than the state of Western Australia itself – wild cats the size of dogs attacking farm livestock!

These cats resembled North American mountain lions – also know as pumas, cougars or catamounts – and terrorised the district of Cordering with their presence.

David wrote a series of newspaper articles about the attacks, and sightings of the large cats, in The Australian newspaper. What followed was a bizarre sequence of events that would alienate farmers, generate a government inquiry and draw claims of a conspiracy to keep the truth silent.

A couple of years after the strange events David put it all together in a book – this book, Savage Shadow: The Search for the Australian Cougar – which would go on to gain status as an Australian cult classic.

With few copies available and the story highly sought after even today, a decision was made in conjunction with the O’Reilly family to re-print the book via Strange Nation Publishing. I reformatted the book and co-wrote the new foreword, bringing a forgotten classic back to life.

So what was really going on in Cordering in the late 1970s? You’ll have to read it to believe it.